Stated or Actual Change in Policy Terrain? Review of the Literature on the Bologna Process Implementation within the Context of Teacher Education in Ukraine 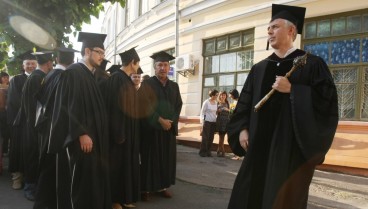 Ukraine's Minister of Science and Education Serhy Kvit at the Ceremony of Freshmen Initiation at the Kyiv-Mohyla Academy. Photograph: Volodymyr Hontar / UNIAN (2011).

The frameworks of globalization and internationalization have impacted academic programs, institutions, innovations, and practices around the world. The launch of the Bologna Process marked a new era in higher education reforms in Europe. The reorganization, that is sometimes called “the most profound revolution in European higher education” (McMurtrie, 2006, p. A39), is well underway with the commitment of 47 signatory countries across the European continent to create an integrated European Higher Education Area (EHEA) with the aim of harmonizing the higher educational systems in Europe. However, as there is no uniform pace for countries to implement the proposed changes, there exist Bologna leaders and laggards (Börzel 2003). Countries with the established systems of higher education, such as Italy, Spain, and Germany, are taking a longer time, while most of the former Eastern Bloc countries have enthusiastically embraced reforms (Charbonneau 2009).

Similarly to other Eastern European countries, the education system in Ukraine has been undergoing considerable transformation over the last two decades. Since the collapse of the former USSR, “the vector of changes [in the system of education] focused on transition from the ‘Soviet school’ model to the democratic European one” (Ministry of Education of Ukraine, 1999, p. 3). Because of its strategic importance for the governmental aims, education was one of the first social spheres to witness frequent (and sometimes, chaotic) transformations after the country gained independence. Education, like the Ukrainian society in general, has experienced a focal shift from totalitarian Marxist-Leninist ideology to democracy and pluralism. The new societal realities required profound educational reforms, including the structural organization of secondary schools, universities, curricula, and teacher and educational administrator training programs at all levels (Koshmanova & Ravchyna 2008).

Since the announcement about Ukraine’s intention to sign the protocol to join the Bologna Declaration in 2005, both European and Ukrainian educators voiced concerns about the impact of the Bologna Process on the country’s higher education system and its integration with EHEA (Artyomenko 2005; Kotmalyova 2006). After Ukraine joined the EHEA, Bologna Process quickly became one of the mechanisms for the Ukrainian government to achieve its goal of reforming the system of higher education in line with European standards (Stepko 2004). As officially reported to the UNESCO European Center for Higher Education, the top priorities of education policy in Ukraine have become further development of the national education system, its adjustment to new economy, and its integration into the European and global community (Kremen & Nikolayenko 2006). These goals initiated a series of declarations and efforts toward implementation of reforms in the field of higher education in Ukraine. The government expressed commitment to an international effort to harmonize higher education by redesigning the curriculum, switching to a three-cycle degree structure, and submitting to cross-national mechanisms of quality assurance (Kremen & Nikolayenko 2006; Clement et al. 2004).

The picture that emanates from the Ukrainian government reports and policies and official Bologna Process documentation (e.g., Bologna National Report Ukraine 2009; Bologna Stocktaking Report 2009; Ministry of Education and Science 2010; Nikolayenko 2007) is that Ukraine has become, in Börzel’s (2003) terms, one of “leaders” in the implementation of Bologna Process provisions. However, researchers have pointed to the discrepancies between official reports and practices, as well as inconsistencies of Bologna Process implementation in Ukraine (Shaw 2013; Shaw et al. 2011a). Furthermore, despite the fact that there have been multiple studies problematizing the implementation of Bologna Process across the contextual mosaic, the recommendations issued by international organizations continue to obviate or ignore the local needs of signatory countries. Hence, implementation efforts within the post-Soviet context are further complicated. We envision these complications, discrepancies, and inconsistencies as indicative of a tension of stated vs. actual outcomes, a dilemma that virtually all policymakers grapple with in any policy development and implementation process.

Of particular interest for gauging the impact of the Bologna Accord on higher education policy frameworks in Ukraine amidst the declared transition to the democratic European system is the area of teacher education. Uniquely positioned at the crossroads between the higher education and primary and secondary education systems, teacher education is significantly affected by transformations and reforms pertaining to both areas. Therefore, through the systematic review of the extant literature and documents, consisting of academic research, program evaluations, conceptual reviews, government policies and statutes, and official Bologna Process reports, this paper reviews the history of Bologna Process implementation in signatory countries and in Ukraine, analyzes achievements and challenges of educational reforms within the context of teacher education, problematizes the nature of educational transformations based on recommendations that ignore the significance of local needs, and posits that greater attention to the tension between actual and stated outcomes of Bologna-initiated policies and reforms in teacher education is needed. In line with the transitological call for exploring moments of educational metamorphosis and seeking to make distinctions between generic and unique factors in post-socialist contexts (Cowen 2000; Silova 2010; Tőkés 2000), this article regards the effects of Bologna Process on government policies and practices in higher education institutions within their complex social, geographical, and institutional settings.

Implementation of the Bologna Process

The aims of the Bologna Process are to expand access to higher education to more of the European population, to better prepare students for the labour market, to promote lifelong learning, to attract increasing numbers of non-European students, and to represent a fundamental underpinning to European democracy (Floud 2006). The breadth of higher education activity that the Bologna Process covers is considerable, spanning, amongst other things, the architecture of qualifications through to doctorate level (thus incorporating qualifications frameworks, credits and learning outcomes) as well as notions of institutional autonomy, student involvement, higher education as a public good, and lifelong learning (Birtwistle 2009).

Through the critical and deconstructive lenses on governmentality, a number of critics (Fejes 2006; Fejes 2008; Nóvoa & Lawn 2002; Nóvoa 2002; Simons & Masschelein 2006) argued that higher education restructuring is conducted in the form of fabrication or standardization of higher education and is governed discursively through the neo-liberal governmentality rather than legislation. Furthermore, they have claimed that signatory states have taken the narratives about harmonisation of higher education for granted by seeing the process as inevitable.

Various analyses documented educational reforms prompted by Bologna Process and the ways its principles have been adopted by and implemented in the various signatory countries (Curaj et al. 2012). The variability in implementation mainly exists due to the fact that the Bologna Process is not endowed with legal obligations. In other words, the signatory countries are not bound by any conditionalities or legal requirements and are encouraged to implement the Bologna policies through the benefits of cooperation and the future benefits of the expected EHEA outcome (Luchinskaya & Ovchynnikova 2011). Thus, the “colourful rainbow” (Zgaga 2009, p. 93) of varieties within European higher education systems constitutes segments, which can prove as barriers to faster and more efficient implementation of new higher education philosophy proposed by Bologna.

Lažetić (2010) argued that a voluntary nature of the Bologna Process leads to uneven implementation. Specifically, the Bologna Process seeks consensus about policy formation at the European level but leaves the implementation to nation states and institutions which are only indirectly involved in policy formation. He concluded that a key challenge of the Bologna Process is keeping up the political momentum and interest of political leadership and policy entrepreneurs for the reform process while preventing it from becoming overly bureaucratic. Scholars noted evidence of convergence of higher education policies, especially in terms of “architecture” of higher education systems (e.g., degree structures) and the use of specific policy instruments (e.g. national quality assurance and accreditation schemes) (Elken et al. 2010).

However, the Bologna Process independent assessment (Westerheijden et al. 2010), the Trends reports by the European University Association, Bologna stocktaking reports, and Eurydice reports indicate the persisting diversity in higher education systems (Elken et al. 2010). This diversity exists due to inherent contradictions of the Bologna Process with respect to convergence-diversity nexus and the differences in the national historical and cultural contexts, goal ambiguity and bottom-heaviness of higher education institutions (stemming from complex, multi-layered involvement of the professionals/actors with a large degree of autonomy) (Huisman 2009). The implementation process has mainly been uneven due to the different contexts, orientations, funding schemes, and demographics of each signatory nation (Education Audiovisual and Culture Executive Agency 2012a). Discussing the impact of cultural, institutional, and socioeconomic factors on higher education systems and adoption of the Bologna Process, Heinzeand  Knill (2008) concluded that the more dissimilar the cultural, institutional, and socioeconomic characteristics of countries the less convergence between them in adopting and implementing the Bologna Process. As implementation structures, approaches, accomplishments, and challenges tend to be context-specific for different signatory countries, we will now turn to the discussion of the impact of the Bologna process in Ukraine.