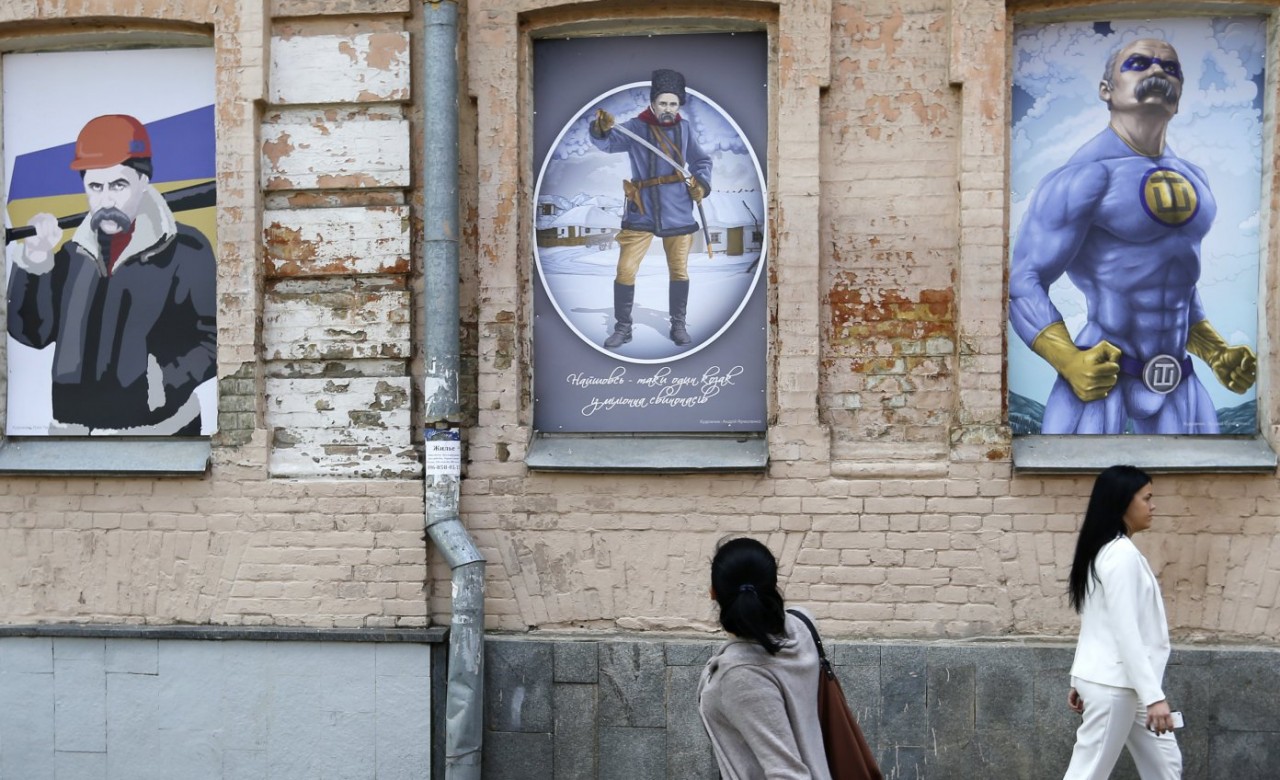 Contemporary portrait interpretations of Taras Shevchenko, Ukraine's most renowned poet who is considered to be one of the founders of the Ukrainian literature. Photograph: Vladyslav Musiyenko/ UNIAN (2014).

The field of Ukrainian Studies is dogged by an epistemological problem. Like nature, knowledge should abhor a vacuum. Academic research should gravitate toward big, unknown, complex things. But if the recent crisis has made anything clear, it is that Ukraine remains Europe’s terra malecognita: large, diverse, understudied, badly understood. At times I illustrate the problem to my students by way of an interdisciplinary analogy: imagine a physicist in 1991 who discovers in her laboratory a new particle, the largest of its kind in a particular system. This particle affects the movement and trajectory of its neighbors and sits at the system’s nexus. Then the physicist notes something even more astounding: the particle is held together in a peculiar way. Most other particles have at least one particular feature that causes them to cohere; this particle does not. Now imagine leagues of other physicists who shrug their shoulders and return to business as usual.

This has been the story of Ukrainian Studies in European higher education outside of the Slavic-speaking world since the dissolution of the Soviet Union. Ukraine is the largest country within the continent, situated at a geopolitical crossroads and bound together not by one language, or one church, or one ethnicity, or even one historical inheritance. Yet at an institutional level, the academy has largely shrugged its shoulders in response to Ukraine’s emergence as an independent state in 1991. It tends not to recognize the country and its people as an official object of knowledge, perpetuating instead a public outbreak across the continent of ‘reverse hallucination’, a condition of not seeing what is there with respect to Ukraine. As I write this essay, Russian forces are amassing along Ukraine’s eastern border. To the casual European observer, they might as well be poised to invade a black hole.

This problem exists despite the dedication of accomplished European scholars like Giovanna Brogi Bercoff, Alexander Kratochvil, Michael Moser and others too numerous to mention here. It also exists despite the activity of the Ukrainian Free University in Munich and of such curricular initiatives as the Ukrainicum summer school at Greifswald and the Ukrainian course at the Institut national des langues et civilisations orientales in Paris. Above all, the problem exists because of a persistent failure in the academy to interrogate the value-bound choices of research in ‘area studies’ and to disentangle intellectual merit from often ossified perceptions of politico-cultural power. In other words, the problem is a prevailing logic by which might is not only right, but read.

This much has been abundantly clear to all of us in Ukrainian Studies, Baltic Studies, African Studies, and so on for some time. Less clear has been our collective response, which has at times bordered on defensive, for understandable reasons. Rather than chronicling this history or detailing the state of Ukrainian Studies in Europe – which could amount to an exercise in shaking a fist at the sky – I would like to make one or two brief and modest suggestions for the future. In general, I am convinced that the international study of Ukraine has tremendous upside, provided we take more academic risks, engender more creativity and connection, and above all market for the public a multiethnic, multicultural Ukraine ripe for innovative interdisciplinary and comparative study.

Engaging the public and letting the intellectual case lead the way: this is all very well and good. But even a cursory glance at dissertations and theses on Ukrainian topics recently produced in Great Britain, for instance, reveals the challenge of our practical follow-through. The very disciplines that can overcome the limitations of language and of geographical and historical distance to reach the public efficiently and effectively – the disciplines of the humanities – are woefully underrepresented. Beyond a few recent notable exceptions, doctoral theses on Ukrainian literature, film, music and visual art have been rare over the past two decades. In British scholarship, Ukraine largely appears as a creature of politics and economics – but not culture.

In one sense, the study of Ukrainian culture stands at the intersection of general crises in the humanities and in Slavic Studies. Its relative neglect should not come as a great surprise, but it is quizzical all the same. Political Ukraine owes its very existence to culture – to Cossack dumy, to folk music, to popular ethnography, to Romantic poetry in the Ukrainian vernacular that invited, seduced, and cajoled readers into the national project. This fact is precisely what makes the study of the Ukrainian language a sine qua non for any student and scholar of the country. It is a matter of simple professional competence. Without a knowledge of Ukrainian, one cannot speak or understand the language of the modern Ukrainian national idea. Similarly, without a knowledge of Russian, one cannot speak or understand the language of a significant part of living, breathing Ukrainian society. We have to promote the former, embrace the latter, and provide both at the curricular level, with short-course pathways for Yiddish, Crimean Tatar and Polish wherever possible.

In another sense, the study of Ukrainian culture stands directly in the wake of over two hundred years of colonial exploitation. We can debate the historical position of Ukraine as a political and economic colony, but its existence as a cultural colony of its neighbors is not in doubt. Today distant echoes of the imperial practices of provincializing Ukrainian culture and of the anticolonial practices of politicizing Ukrainian culture continue to resound in Slavic Studies. These are practices that reductively cast artists as either zeroes or heroes, as unworthy of scholarly attention or unassailable beyond certain norms. They can stifle conceptual innovation and lead to intellectual inertia. Beyond the work of scholars in the Ukrainian diaspora, for instance, it is very difficult to find published English-language scholarship on nineteenth- and twentieth-century Ukrainian literature. The work of Taras Shevchenko, one of the most extraordinary and extraordinarily influential artists in modern European history, is rarely broached. This neglect – as outrageous as it is – presents us today with a remarkable opening and an opportunity for reinvention and scholarly entrepreneurism. I am very intrigued by, for example, the application of the digital humanities and ‘computational criticism’ to colonial Ukrainian literature, which could jettison it out of the provincial-political realm and into a new constellation of ideas about transnational exchange and global culture. In general, whatever our methodology, we need to revisit Ukraine’s colonial-era culture with the same sense of excitement and open-ended potential as we do its postcolonial-era culture – to read, say, Mykhail’ Semenko or Valer’ian Pidmohyl’nyi as we do the ever-popular Serhii Zhadan.

We also need to facilitate and enable more readings of – to continue the analogy – Semenko or Pidmohyl’nyi alongside Zhadan. Today Ukrainian literary fiction is flourishing at a rate unseen since the 1920s, and a number of scholars have recently offered brilliant close readings of this more recent work, particularly in the context of Memory Studies. Going forward, we would do well to encourage our students to leverage this vibrant interest in the contemporary period in the service of more ‘vertical’ contextual analyses that can join postcolonial production with colonial pretexts – Oksana Zabuzhko and Lesia Ukrainka; Iurii Andrukhovych and Ivan Kotliarevs’kyi; etc. – in a variety of interpretative frames.